I have some sad news to share: Drollerie Press–home to mythic fiction–is closing up shop. Read about it here.

And other bits and pieces from the writing world:

Literary Journal Submissions 101 – “To submit your latest short story, essay or poem, you’ll need a cover letter—which is much different from a query. Use these tips from inside a creative writing program to help your letter make the grade.”

Kids’Magination Magazine Submission Guidelines – “Kids’Magination Magazine, where kids can enjoy learning and reading, is open for submissions of short stories, flash and microfiction. We want stories suitable for 9 to 14 year-olds – stories that will excite the reader found in all kids, of all ages, youth and adult.”

Pongo Teen Writing –  “The Pongo Teen Writing Project is a volunteer, nonprofit program for teens who are on the streets, in jail, or in other ways leading difficult lives. We love to help young people express themselves through poetry, especially teens who have never written before. (And we want to share our teaching techniques with caring adults.”

A new short story collection from Tamora Pierce means it’s time to take a break from writing and get busy reading:

Tortall and Other Lands by Tamora Pierce: From Amazon –  “Collected here for the first time are all of the tales from the land of Tortall, featuring both previously unknown characters as well as old friends. Filling some gaps of time and interest, these stories, some of which have been published before, will lead Tammy’s fans, and new readers into one of the most intricately constructed worlds of modern fantasy.”

And while you’re at it, check out these other short story collections for teens:

Drollerie Press’s Playthings of the Gods (includes my story “Naiad”): From Black Sun – “Playthings of the Gods is one of Drollerie Press’ strongest anthologies to date, filled with tales both heart wrenching, and empowering.  One thing that really ties the anthology together, aside from the theme, is the very lyrical prose. While each author has a style of their own, some stories compliment each other so beautifully you would swear it was intentional.”

As long as I’m doing a little self-promotion then take a look at my collection of short stories from Sam’s Dot Publishing,  The Curse of Blackhawk Bay – “Around Lake Trillium strange events occur. Children disappear, ghosts appear, and a man bursts into flames. The lake itself is inhabited by something vast and dark. With each event there appears a crow–but what does it want? Who will be next to confront the secret of the lake and of Blackhawk Bay?”

The Kissing Game: Short Stories by Aidan Chambers: From Amazon – ” These provocative stories beautifully lend themselves to discussion, and once again Chambers treats us to his fiercely intelligent, finely crafted prose and his incisive understanding of the wonderings of young people on the verge of adulthood.”

The winner of the ebook giveaway, Playthings of the Gods, is Halli from Alberta (visit her blog at: hallililburn.blogspot.com ). Thanks to everyone for entering the contest. 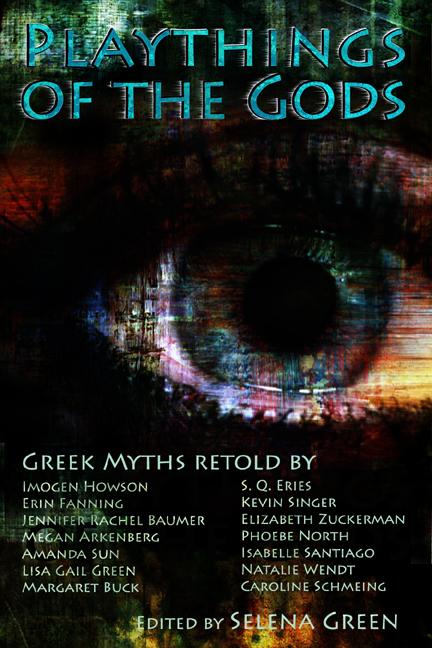 Also be sure to read Writing for the Teen Religious Market from Writing-World.com. The article is a little dated but the advice is still excellent.

Win an ebook of Playthings of the Gods (Drollerie Press, 2011).

You can enter the ebook drawing in two ways: 1.) leave a comment, along with your email address, on this post by March 1 OR 2.) subscribe to Word Crushes by March 1. A winner will be chosen at random with the help of Random.org.

From the publisher: “Forget what you think you know about Greek Mythology. The Gods are back—if they ever left—and this time they’re using our modern world as their playground. Enjoy fourteen stories that take you from deity-inhabited skyscrapers to cobwebbed, gated manors atop a hill, and everywhere in between.”

And if you’d like to write your own story based on mythology, legends, or fairy tales, then check out these markets for older teens through adults:

Know of any other markets for myth-lovers? Then leave me a comment with the publication’s name and URL and I’ll add it to the list. 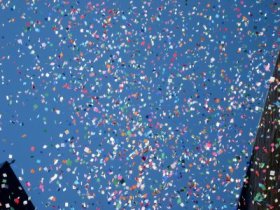 Welcome to the launch party for Word Crushes!

Surrounding me are some of my favorite short story writers: Margo Rabb, whose prose can make you laugh and cry (practically at the same time), Ethan Canin, every bit as handsome as his writing, and  Flannery O’Connor,  for a dash of Southern Gothic.

No party would be complete without a guest of honor or two. So amidst the confetti, I’d like to introduce the just-published Playthings of the Gods  (Amazon Kindle edition) (Drollerie Press,  2011), an e-book collection of young adult stories based on Greek mythology (and home to my story, Naiad). Drollerie Press–known for its transformative fiction–has taken myths and spun them around, updating them with modern themes and settings.

What do you hope readers will take from “Playthings of the Gods”?

More than anything I hope readers will develop a love for the fantastic storytelling that exists within myths and legends. There is so much rich history, so much fantasy, and so much potential in those stories. Every culture has them and though they’re all a little different, they definitely share an air of the familiar. It’s often said that there are no more original ideas, that everything is some sort of recycling of something else. But this anthology shows the potential storytelling magic that still lies in these bits of mythology and the authors have created some beautiful new worlds using them as base. As you can see, I can get a little geeky when it comes to all this stuff. The reason Drollerie Press often works with elements of the mythical is because we have a passion for it.
Who are some of your favorite authors and why?
I don’t have ‘favorite’ authors, as I find I’ll often give new authors a chance in hopes of feeling that spark. But I do have go-to authors who never disappoint me. For YA- Megan Whalen Turner, Anna Godbersen and Maggie Stiefvater are some of my current obsessions. For my adult reading, I’m still hopelessly obsessed with Karen Marie Moning’s Fever Series. She’s a fantastic writer.
What do you look for in a story?
I look for that emotional connection, first and foremost. I like to be able to get gut wrenchingly involved. Whether it be in love, in angst, in fear- I want to feel it. I’m also a sucker for lyrical prose. That’s just the musician in me, I think. I’m also a fan of a well told love story. Make me cheer for your hero and heroine and I will fangirl you forever.
Why would you pass on a story?
I hate stories that don’t feel genuine. If the emotion conveyed isn’t coming from a real place, the story falls flat. I want to see living, breathing characters on the page. Not stereotypes or copies of other famous characters *cough, Edward, cough*. I’ll often forgive a slow or weak plot and be willing to work with the author if the characters really capture my attention.
Does Drollerie Press have plans for more young adult anthologies?
At the moment there are no exclusive YA anthologies planned, but I can guarantee that there will be more in the near future! I had a great time reading and editing the fourteen stories found in “Playthings” and I’d be thrilled to put another anthology together for the sheer guilty pleasure of doing tons of fabulous reading.