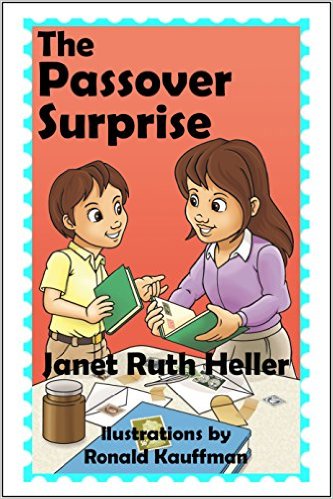 It’s an honor to have award-winning author Janet Ruth Heller with me once again to discuss her new children’s book, The Passover Surprise (read my review), as well as her writing process and other literary insights.  It’s such a great interview, full of so many interesting tidbits, that I’ll jump right into it:

Tell me about your writing style? How would you describe it?

I try to write in a very clear and concise style.  I avoid extra words, especially adjectives and adverbs.  I want to communicate well with my readers, so I avoid ambiguity in prose.  I experiment with more ambiguity in my poetry, however.

Your writing style comes through in your most recent work, The Passover Surprise. How did you come up with the title?

I have always loved the Passover holiday because we used to spend it with my mother’s twin brother’s family.  My main character, Lisa, has conflict with her father, and I thought that Passover was a perfect time to resolve this conflict.  Passover also celebrates the Jews’ independence from Egyptian masters.  Lisa has learned how to cope with a difficult problem and is becoming a more independent young woman.  Therefore, Passover seems the right holiday to celebrate Lisa’s new maturity.

Almost all writers are also voracious readers. What books have most influenced your life?

My mother read Robert Louis Stevenson’s A Child’s Garden of Verses (1885) to me when I was a child.  I loved the poems’ rhythm and imaginative details.  I was sick a lot as a child (so was Stevenson), so I especially identified with the poem “The Land of Counterpane.”  I read Teenagers Who Made History (1961) when I was a teenager in the 1960s.  Author Russell Freedman portrays young people who began to succeed in their chosen careers when they were teenagers.  He chooses both men and women from very different fields.  Because I was a young writer, I especially connected with the story of Edna St. Vincent Millay, the poet, who won a college scholarship after placing second in a national poetry contest.  This book helped to inspire me to become a professional poet, dramatist, fiction writer, essayist, and literary critic.

If you had to choose, which writer would you consider a mentor?

I learned from John Ciardi’s How Does a Poem Mean? (1959) to write concisely using specific details and images.  He helped me to make my writing less wordy.

And what are you working on now?

I’m revising a scholarly essay that I wrote about Jaimy Gordon’s novel Lord of Misrule (2010).  I share her love of horses, and I admire her ability to portray the diverse characters surrounding an obscure racetrack.

Looking back, do you remember when your interest in writing first began?

My first-grade teacher Mrs. Mesias did a poetry writing workshop with us.  She liked one of the poems that I made up so much that she dittoed 25 copies of it for the class.  The poem was about flying a kite with my father in a park.  I guess that was my first publication.  I was lucky to have fourth-grade teacher Marjorie Schroeder and high school teachers like Zelma May Oole, Barbara Gensler, and Margaret Sturr, who also admired my writing and encouraged me to develop my skills.

If you were an animal in a zoo, what would you be?

I love antelopes because they are graceful and can run fast even over rugged and rocky terrain.  In contrast, I’m rather slow-moving and I have wobbly feet.

You are given one superpower… What would you select?

I would like to be able to know what people are secretly thinking.  Sometimes, I misinterpret people, so I would prefer to understand them better.

And I couldn’t agree more–reading minds would be an excellent superpower and particularly useful for an author. As always, it’s been a pleasure to host Janet today, and I look forward to seeing what pleasant surprises her work brings to readers in the future.