With a tag line like that, you just know that Juliette Cross’ new book, Sealed in Sin, will keep you reading late into the night.

One demon prince may be festering in the bowels of the soul eater Cocytus, but Genevieve’s troubles are far from over. Prince Bamal, demon lord of New York City, still wants her. But this time, he wants her alive, to control her inherent power as a Vessel of Light.

With Jude Delacroix off searching for the prophecy, Thomas—a guardian angel with sea-green eyes and an aura of winter woods—steps into the gap, offering her the power to protect herself.

Yet she hesitates, for the transfer of that power comes through a kiss. While Gen’s love for Jude is true, Thomas stirs a desire where there should be none. Thomas also knows Jude’s darkest secret and plans to use it, if necessary, to win Gen for his own.

While her Vessel power grows and more demon spawn creep from every dark corner of the world, one thing is certain—the Great War between the angels and demons is quickly approaching. And Gen is in a race against time to awaken her full power before the storm breaks. 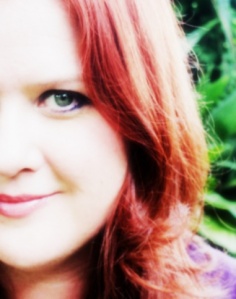 Juliette calls lush, moss-laden Louisiana home where the landscape curls into her imagination, creating mystical settings for her stories. She has a B.A. in creative writing from Louisiana State University, a M.Ed. in gifted education, and was privileged to study under the award-winning author Ernest J. Gaines in grad school. Her love of mythology, legends, and art serve as constant inspiration for her works. From the moment she read JANE EYRE as a teenager, she fell in love with the Gothic romance–brooding characters, mysterious settings, persevering heroines, and dark, sexy heroes. Even then, she not only longed to read more novels set in Gothic worlds, she wanted to create her own.

“Hiiii, Juuude.” Mindy actually cooed his name as she crossed into the living room right before the man himself waltzed into my kitchen.

“Hello, Mindy.” As always, he sounded dark and rough, which did strange things to my insides.

Apparently, Dave let him in. Not that a door could or would stop Jude Delacroix from going wherever he damn well pleased. Still, it was nice when he pretended to be human, knocking and stuff, rather than appearing out of nowhere and scaring the bejeezus out of me. He had to put on the whole I’m-normal-and-walk-through-doors routine at my apartment when Mindy was home.

The moment he entered the room, all my senses rose to full alert. The man packed enough heat and power in his aura to melt a girl into jelly. A mere glance from his dark eyes or slight touch from rough hands, and I was lost.

I focused on flipping the pancakes on the stove, still trying to figure out how to tell him about our trip to the House of Hades, the near-miss with Gorham, and the brief and strange meeting with my guardian angel. Kat preferred asking forgiveness rather than permission, or just omitting the admission of any sins altogether. But I had trouble lying, though I seemed to do it often as of late. I especially had trouble lying to Jude.

“Want some brinner?” I asked, plopping another dollop of butter in the pan.

“Brinner? What might that be?” He leaned with his back against the counter next to the stove, splaying one huge hand on the countertop, watching me pour the batter into the pan. How did this man make watching me cook a sexy thing?

“You’ve never heard of brinner?” I glanced at the door to make sure Mindy was out of earshot. “For someone who’s been alive nearly two thousand years, you don’t know a whole lot.”

He slid a finger down my forearm. I nearly dropped the spatula. He leaned closer, his chest brushing my shoulder, voice dropping several decibels. “Educate me.” And just like that, my heart slammed into my rib cage, my thoughts scattering to the wind. I stared at him, knowing my eyes were no longer hungry for pancakes. He pressed warm lips, a feather-soft kiss, to the slope between my neck and shoulder. “Genevieve?” Another press of lips higher up my neck, melting me into goo.

“Hm?” Eyes closed, I welcomed a third kiss just under my jaw.

“Your brinner is burning.”

I snapped open my eyes, grabbed the smoking pan and thrust it under the water faucet in the sink. A hissing crackle spit up more smoke.

“You’ve made more than enough already.”

He motioned to the ten-high stack with a smirk. I couldn’t even think about eating now. Not after that kiss. And not with this guilt weighing me down.

Something registered in his gaze. He reached out his hand.

From his expression, I wasn’t sure if he planned to give me a hug or a spanking. I wouldn’t mind either. Taking his hand, I let him pull me into his arms.