While riding the Payette Rim/Bear Basin Trail this morning—blue sky, yellow leaves, white birches—my husband Keith and I passed a shepherd, a short, swarthy man, adjusting the saddlebags on one of his horses. We walked our bikes and exchanged solemn greetings. His border collie barked, stopping when the man muttered something only the dog could hear, and sheep wandered nearby in the forest. It reminded of another ride years ago on the same trail but a much different autumn day. 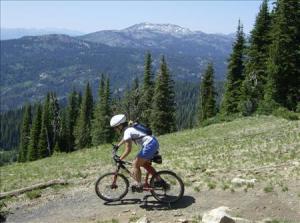 Five Great Pyrenees, snarling, bounded across Bear Basin toward Keith, who madly pedaled his mountain bike. His legs spun but the dogs closed in, mud streaking their white fur. They sprinted against a canopy of clouds, a silver cloak covering the sky, like a gray background used in a photography studio.

Snow kissed the rounded summits of the mountains surrounding us. My eyes teared from the cold and Keith’s orange bicycle blurred. The frigid October morning bit into my gloved fingers. The largest dog, eyes never straying from Keith, broke away from his four companions. His loping strides took him farther and farther from the sheep the Pyrenees guarded.

The animals milled around, oblivious to danger. Occasionally one bleated as they rammed into each other, but they were mostly silent, following the lead of the four shepherds that stood nearby. Two border collies pranced behind them, and one of the men raised his hand to me in recognition.

We had met earlier in the day as the sheep were being herded down a mountain toward Bear Basin. The Pyrenees, one of the men said, fought wolves, bears, and cougars without hesitation. The shepherds, with their wagons and horses, seemed to have stepped from a Western novel. They watched the Pyrenees without concern, looking almost bored.

All of this unfolded in front of me within minutes, but it seemed much longer. The gray sky stretched endlessly, and the five dogs, still growling, gained on Keith. Fear filled me as I perched on my mountain bike, a few hundred feet behind him. I straddled my bicycle and watched, unable to help.

Quickly, though, wonder replaced fear. The dogs powered forward with raw beauty and strength. I thought about the random timing that had brought us to this moment and how life brims with these chance events.

Apprehension mingled with awe and I hopped on my bike. The dogs slowed and barked, no longer worried that Keith threatened their precious sheep. As quickly as the Pyrenees had approached, they retreated, returning to their duties, and we continued, as if nothing had happened, following the forest road back to town.