On August 22nd, Shane Harris stood on top of 12,662-foot Mt. Borah, Idaho’s tallest mountain, pulled a Drone Flute out of his backpack, and proceeded to play. A haunting tune greeted other climbers as they joined Shane on the peak.

The melody floated across Borah’s cliffs and boulders, as if specifically written for that ancient mountain, evoking the flute’s indigenous roots. “A flute?” the other climbers must have asked themselves. “Here on Mount Borah?”

But those of us who know Shane aren’t surprised—delighted, perhaps, but not surprised. For Shane possesses the soul of an artist, a whimsical touch, and an intuitive ability to add an element of magic to an event, sealing it into one’s memory forever.

So there he stood on the craggy rock, surrounded by mostly strangers, save for his climbing friends, Brent and Logan, and played his flute.

Made by Joe, Shane’s long-time friend, dating back to when they were art students at Boise State University, the flute was crafted with skill and careful consideration: big leaf maple from Joe’s yard; American holly collected from the bottom of the Snoqualmie River, and even bowhead baleen from the Arctic.

Below Shane stretched the 5 miles and 5,000-foot-elevation-gain he had just conquered, including the infamous Chicken-Out Ridge. Yet, as I pictured it, Shane wasn’t looking down but upward, his heart open, reaching to the heavens, full of love and bittersweet memories.

And, despite the hazy skies—filled with evidence of the West’s ubiquitous forest fires—I’m sure Shane’s melody drifted up and up, finding a direct path to those-–Kelly Fanning and Sam Rohm—for whom the performance was intended. Although I wasn’t there, I could see Shane, his genuineness apparent to everyone, carrying Kelly, Sam, and all the people he has loved on his shoulders, sharing his accomplishment by commemorating their memory.

That evening, my husband Keith—who had also climbed Borah that day—and I joined Shane at the Mackay Tourist Park, where he was camping for the weekend. Stories were swapped. Shane’s sweetheart Bobbie told me that, while waiting at the bottom of Borah to pick up Shane, she showed his picture to another climber, who lit up, saying, “He definitely made it to the top. When we got there, we heard this beautiful, ethereal music and it made the climb extra special.”

Later, we all gathered around the campfire as Bobbie on guitar, Brent on mandolin—both members of the Blue Road Ramblers—and Shane on upright bass sang tunes from Lyle Lovett to Nancy Sinatra. CCR’s Down in the Corner was sung in memory of Sam; Don McLean’s American Pie for Kelly (friends Roger and Cathy helped us remember the lyrics to that lengthy song).

The campground grew quiet; lights flickered on in trailers and motorhomes. Another campfire flamed to life, and I sensed an audience beyond our small group. A sliver of moon brightened the sky, highlighting a silhouette of mountains, finally visible as the smoky haze cleared.

The concert continued around me; yet, I couldn’t get a solo flutist out of my mind. Playing on top of Idaho, playing from his heart, playing not only for Kelly and Sam, but for all who love him and know that, even though we don’t share his genes, Shane has been a brother to us all. 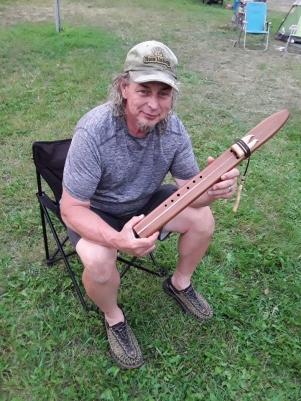 Happy birthday, Shane! Thank you for organizing the Borah trip, but, most of all, thank you for your friendship and for never failing to delight me with your inventiveness and thoughtfulness!