From Borneo to Baja, the adventurers in the following books face obstacles as frightening as any horror movie, except they can’t go home after the lights come on. Some readers will salivate over their stories, ready to sign up for the next trip, while the rest of us can simply enjoy a vicarious thrill, relieved to be reading from the comforts of home.

Snakes, scorpions, sharks, tarantulas, and whirlpools waited for Jonathon Waterman and his wife of one year when they launched their sea kayaks into the Vermilion Sea, better known as the Sea of Cortez. Their two month journey, recounted in Kayaking the Vermilion Sea: 800 Miles Down the Baja, is punctuated with lyrical observations.

Waterman tells of a rocky journey, including a competitive relationship with his wife that sometimes leaves him bobbing in the sea, alone and lost, while she races ahead. However, for every choppy day at sea there are moments of celebration: paddling with dolphins, a brilliant sunset, or the solitude of an uninhabited shoreline. 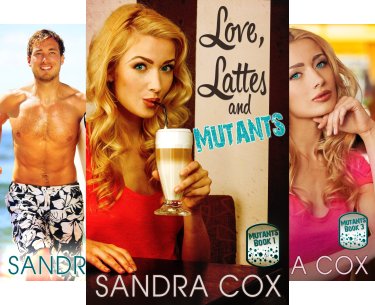 Departing from nonfiction into author Sandra Cox’s imaginative c, protagonist Piper Dunn straddles two worlds. Love, Lattes and Mutants–a page-turning romp through the world of teen romance–boasts expert touches of humor and a dash of life-threatening adventure (currently free at most distributors and the second in the series is only 99 cents!).

In her public life, Piper is a mousy high school student, hiding her astonishing beauty and trying to get through the day unnoticed. But in private, thanks to her dolphin DNA, she is a defender of ocean creatures, rescuing dolphins and other marine animals from danger. Eventually, Tyler, a hunky new boy at school, starts to see through Piper’s disguise and wants to get to her know better. And Piper has difficulty saying no. (Read the rest of my review here.)

Back in the realm of memoir, Ann Linnea describes the extreme solitude she discovers when she becomes the first woman to circumnavigate Lake Superior in a sea kayak. She tells her story in Deep Water Passage: A Spiritual Journey at Midlife, a humble account of an extraordinary adventure. Paddling in a rudderless sea kayak, Linnea battles not only unforgiving Lake Superior but a desire to make a major life change.

If you push past Linnea’s New Age babble, you are rewarded by an inspirational story full of Lake Superior’s imagery: towering freighters, tree-shrouded islands, and hearty Lake Superior natives. Linnea returns home with not only sore shoulders but the resolve to recreate herself.

While Linnea was forced to travel light due to limited storage space, Tracy Johnston had no choice. She arrived in Jakarta to raft Borneo’s Boh River while her luggage stayed in Los Angeles. Instead of taking this as a sign to head home, she bravely plunges into a series of misadventures, recounted with humor and passion in Shooting the Boh: A Woman’s Voyage Down the Wildest River in Borneo.

Hired by the trip’s sponsor to write about the first rafting attempt of the treacherous Boh, Johnston is joined by not only the guides but two fashion models, a rich Italian, two Australians, and a Chicago attorney. As the journey becomes more challenging, from foot rot to waterfalls, this personality jumble deteriorates into a group of solo travelers intent on survival.

Whether writing memoir or fiction, all of these authors are such vivid storytellers that you will become lost in their adventures: swatting at the black flies Linnea encounters; dripping with perspiration while Johnston describes Borneo’s moist jungle; shivering with cold when yet another wave drenches Waterman; or marveling at the underwater world Cox invents.