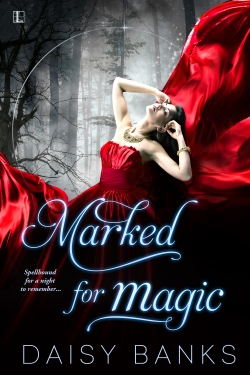 I’m thrilled to host author Daisy Banks today as she introduces her new book Marked for Magic (Lyrical Press/Kensington) and offers a bit of magic of her own with a posting on palmistry.

I decided that as palmistry was the initial inspiration for this fantasy romance, I’d offer readers a little something on palmistry marks. The image below shows you the main lines that can be found on a person’s palm. 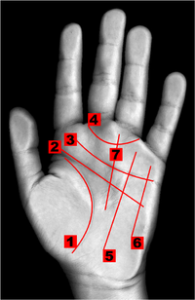 These main lines above are fairly well known, but the lesser lines are not quite so well understood and it was these I was studying when I got the idea for Marked for Magic.

There is a mark some people have on their hand, a curved line at the base of their forefinger, the Jupiter finger. This unusual mark is called the ring of Solomon. People who have this rare marking are usually intelligent, philosophical, and tolerant.

Did if you find this mark on your hand?

The witch mark on Nin’s hand is a curse. She has no magic powers, whatever the lore says. But the village believes. The old crone’s wisdom is to see her banished. Ragged and hungry, she must serve the Mage. Alone in his tower, she is his chattel. But Mage Thabit is not what Nin expected—the bright green eyes and supple form under his cloak are not the stuff of nightmares, and kindness hides in his brusque heart. Thabit senses that Nin is more than she seems, too. When true nightmares haunt the land, it is precisely her elusive powers that might deliver them…

By early evening, she’d only found twelve small seeing mushrooms. They rolled around in the bottom of the collecting basket. Her feet ached, for in her search she’d walked farther and farther into the darkened shadowy spaces. Worse than sore feet, though, she stared to find her way through the trees until her eyes burned and stung. She had no clue how to get back to the tower. She recognized nothing here through the welter of close-knit leaves.

Maybe he wanted the wolves to eat her. She’d be a nuisance to no one then. How could he be so mean?

She huddled down at the base of a large ash tree where she ran her fingers over a blade of grass so it squeaked. How would she find his tower before dark? Her empty stomach rumbled.

Anger that he’d sent her out here evaporated with the need to find him again. There was no one else who could help her. The twilight shadows grew deeper, wrapping the woods in their embrace. Tiredness blurred her vision. Even if she hadn’t been lost, she’d have been afraid to go back without all the mushrooms he wanted.

The sun sank lower. The first white stars shone in the deepening night-shaded sky. She curled up, wrapped her arms around the basket, and waited for death.

By moonrise, still the wolves hadn’t come, but her fear continued to grow. Her breath shallow, she darted her glance to the trees, to the dark shadows between them, and back again.

If only he would come to find her, she would do anything, she’d be so grateful. A leaf brushed her cheek, so she looked up as she moved it away. If she climbed the ash tree, perhaps light from the tower might lead her back.

Hope warmed her. She swung up onto the lowest branch of the tall tree, gave the next bough a tug to make sure it would take her weight, then clambered up where she clung tight.

The morsel of hope grew as she searched in all directions, but it withered when she saw only more branches and leaves. She grasped the next branch above.

Relief slid over her. Though he didn’t sound pleased, the Mage had come to find her. She swung down onto the first branch, but caught her lip at his frown. He reached up to yank her down into his arms.

“If I discover you have done this to plague me”—his nose loomed tip-to-tip with hers—“I will renege on my promise, and I will beat you soundly before I turn you into a sparrow.”

The sensation and safety of his arms took the spleen from his words. She didn’t care if he might beat her, as long as he took her back to the tower. “I got lost.”

“Hmm, did you? And my mushrooms?” He still held her. His mouth twitched in a half smile.

To her surprise, he didn’t put her down, but strolled over, bent with her in his arms, picked the basket up, and hooked it onto his elbow. His brow wrinkled in obvious displeasure as the little mushrooms rolled around. She closed her eyes, praying they would double or treble in number. Sadly, they didn’t. She hoped he’d not beat her hard.

Daisy Banks writes sensual and spicy romance in the historical, paranormal and fantasy genres. She is an obsessive writer and her focus is to offer the best tale she can to readers. Daisy is married with two grown up sons. She lives in a converted chapel in Shropshire, England. Antiques and collecting entertain Daisy when she isn’t writing and she occasionally makes a meal that doesn’t stick to the pan.

Find Daisy on the Internet