Third in a series celebrating the men who have shown me the meaning of dignity and courage, as well as giving me a love for books, skiing, and RVing (and an appreciation for wrench collecting). 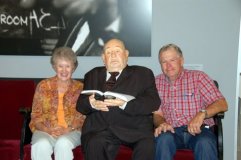 We arrived in Seattle as the Texas A&M Marching Band jammed on the cd player. P.T. (Pete) Rathbone steered his SUV with one hand and increased the volume with the other. My mom tapped along to the beat of drums while still immersed in reading the Wall Street Journal. And I sat in the backseat, cocooned by Aggie music, Cascade Mountains, and gray sky.

An Aggie alum, Pete plays the marching band every Saturday morning before the football team takes to the field. It’s a good-luck ritual, a reflection of Pete’s many interests, which range from farming to wrench-collecting to traveling.

Technically, Pete’s my stepfather but that word somehow reminds me of Cinderella and scrubbing floors–blame it on my strange imagination. Besides, Pete is more than a simple label—he’s friend, confidante, and co-conspirator. He’ll just as easily sit by your hospital bed as take you on a Caribbean cruise. He’s first to donate to a cause or tackle a pasture full of noxious weeds.

The Aggie music continued as we drove onto the ferry for Bainbridge Island. Pete, Mom, and I were silent, admiring the Seattle skyline to the rousing thrum of trumpets, tubas, and drums.

I had never cared much for marching band music before but that has changed, all because of a wrench-collecting Aggie with a generous heart.

The Idaho Statesman featured an article about Pete’s wrench museum, reprinted here in the Deseret News. And order his books here.

One thought on “Celebrating Fathers 3: The Aggie Wrench Collector”