The following essay was written almost seven years ago; yet, all of the characteristics that made my niece Sheridan exceptional then still hold true today as she turns fourteen. And I’m sure those  traits will only strengthen over the years, making her a constant joy to everyone who knows her! Happy birthday, Sheridan!

Sheridan’s Compass (written during the fall of 2011)

She wore a black leotard, matching leggings, a filmy ballet skirt, and cowboy boots—or “cowgirl boots” as she called them. Ballet slippers dangled from her fingers; her hair escaped from a messy ponytail. She was on her way—Sheridan style—to ballet class.

I hesitated. We sat side by side—she in the passenger seat, me in the driver’s seat. Her right was my right. What was I missing?

She turned to me, blinked once–blue eyes, black lashes, a flutter of day and night. I didn’t question her directions, her misunderstanding of the term “my right.” I simply turned the truck, following Sheridan’s GPS, her way of seeing the road.

I’ve learned from experience that Sheridan’s internal compass often leads to a better place—even if you’ve been there before—and sometimes it’s best to just let her take you there.

A simple game of tag evolves into Cartwheel Tag. We never quite decided whether the tagger or tagee should be cartwheeling, but both ways ended in confusion and plenty of laughs, particularly at my attempts to cartwheel.

Or a bike ride to town transforms into an outing for root-beer floats with Sheridan, on her single-speed bicycle, always ready to tackle hills and singing B-I-N-G-O with Uncle Keith as she peddles along.

One Christmas, using her new tablet as a camera, Sheridan filmed the Snowman Video. A stuffed snowman took the starring role with Sheridan as interviewer.

She used the same tablet to document The Many Faces of Sheridan, a tableau of close-up photographs, which grew into an autobiographical mini-documentary of Sheridan through several days of late December and into early January. All the photos shared two things: a hint of mischief and a literal twinkle in Sheridan’s eye, the look of someone planning fun, thinking of the next activity. 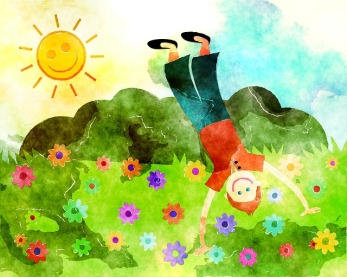 So I don’t question Sheridan when she says, “turn right, my right.” Even if it appears that our rights are the same, hers is bound to have a twist, a way of approaching life that is more original, more energetic… just more of everything. I simply turn the wheel and follow her lead, knowing the experience will be better for letting her take me there.