Forget about partridges in a pear tree, turtle doves, and French hens… What the holidays really need are Ten Zany Birds, the charming picture book by author and musician Sherry Ellis. 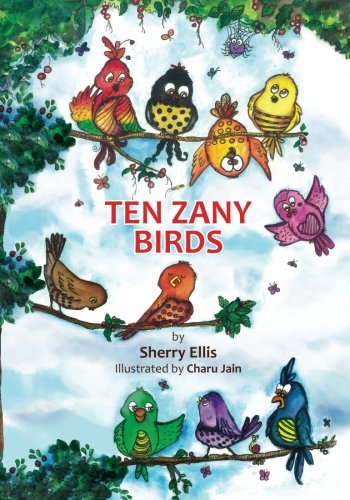 So I’m thrilled that Sherry stopped by for an interview to talk about her work–from inspiration and favorite books to superpowers and travel destinations.

Tell me a little about the title–how did you come up with it?

I knew the book would be a counting book about birds, so “Ten” and “Birds” were no-brainers. The question was what adjective should be used to describe the birds. I made a list – “silly,” “little,” “funny,”… and finally came up with “zany.” I like the word because it’s different and sounds fun. I realize it’s not a word most preschoolers are familiar with, but after discussing it with my critique group, I decided if kids didn’t know it, they could ask an adult and learn a new word. (Zany means funny, in a crazy or silly way.)

If you had to choose only one writer as a mentor, who would that be?

Diana Jenkins, author of Stepping Stones: The Comic Collection, Now You’re Cooking, and several other books, has literally been my mentor. She was part of my critique group when I lived in Ohio. She has this great ability to see plot holes and generate helpful ideas for polishing manuscripts. I have learned so much from her, and I am extremely grateful for what she has taught me.

Do you recall how your interest in writing originated?

I have always been an avid reader with a vivid imagination. My first stories were written when I was eight years old. I still have a few of those manuscripts. Writing was one of the ways I entertained myself.

Where did your love of books come from? And what were some of your favorite books when you were a child?

My mom always read to me when I was little. That’s where it started. We didn’t have computers and video games when I was growing up, so I read books to keep myself busy.

I enjoyed the Nancy Drew mysteries. I couldn’t get enough of them! One of my first favorite books was James and the Giant Peach by Roald Dahl. The imagination of the author captivated me.

What did you enjoy most about writing Ten Zany Birds?

Coming up with things that would distract the birds and make them leave the party, was the most fun. I imagined what the illustrations would look like as I came up with the various scenarios. Illustrator, Charu Jain, did a great job bringing it all to life.

What are some of your interests outside of writing?

I am a professional musician, so I enjoy playing the violin, viola, and piano. Outside of that, I like exploring the great outdoors – hiking, SCUBA diving – and seeing new places.

And now for a few goofy questions…

If you were an animal in a zoo, what would you be?

A peacock. Not because they’re pretty – female peacocks aren’t – but because they get to roam around wherever they want, and aren’t stuck in an enclosure. Being stuck in one place would drive me crazy!

Where is one place you want to visit that you haven’t been before?

It’s on my bucket list. I hope to get there in about five years. I’d like to dive the Great Barrier Reef, attend a concert at the Sydney Opera House, and hold a koala bear (because they’re cute!).

If you had a superpower, what would it be?

The ability to teleport anywhere at will. I’d be able to see and do so much more if I could!

And that’s a superpower I think everyone can relate to… Continue reading for more information about Ten Zany Birds and Sherry Ellis.

Ten zany birds have a party in a tree, singing and dancing. Five have stripes, three have spots, and one has purple polka dots. They’re all having fun, but one by one, they become distracted.

One is frightened by a loud plane. One gets hungry. One wants to race and another needs a bath. Only one stays to sing in the tree, but who will it be?

Ten Zany Birds is a fun, beautifully illustrated picture book. As parents and teachers read, children are introduced to counting and basic subtraction skills. Whenever a bird leaves, the number of striped, spotted, and polka-dotted birds changes, teaching the application of simple classification rules. 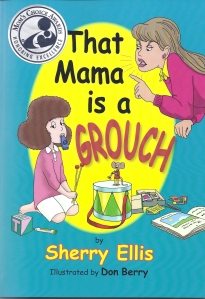 Sherry is also a professional musician who plays and teaches violin, viola, and piano.  She has appeared as a soloist in Germany, and was a semi-finalist in the 2004 International Viola Competition held in Paris, France.  She is actively involved in the American String Teacher’ s Association, and has served terms as Secretary and Vice President of the Ohio String Teacher’s Association.  Sherry is the principal violist of the Georgia Philharmonic.

Additionally, Sherry is a lifetime member of Cambridge Who’s Who and was honored as a 2010 VIP of the year.  In 2012, she was honored as a Woman of the Year by the American Biographical Institute for her contributions in the field of music education. Sherry was the recipient of the 2013 Top Professional of the Year award given by Worldwide Who’s Who and has been recognized as a Top 100 Professional by the International Biographical

Find Sherry on the web

23 thoughts on “Who needs a partridge in a pear tree when you’ve got Ten Zany Birds?”