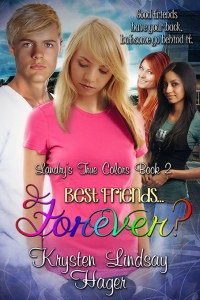 Writing is never easy but trying to capture the teen years on paper is especially challenging, so I’m excited to have author Krysten Lindsay Hager on my blog today with a guest-post about just that.

The Landry’s True Colors Series is all about self-esteem, friendships, crushes, fitting in, middle school and high school, frenemies, values, and self-image. It’s not always easy for me to go back in time and revisit those memories, but it’s part of the process. I knew I wanted to be a writer at a very young age, but I got serious about it right when I graduated from high school. The hardest part for me was finishing a story, but I did that for the first time in college with a novella while doing a one-on-one study. It was then that I decided to write young adult fiction and I started re-reading my old journals and going through old memories. When I got married I thought that even though I had started getting published under my maiden name, it would be easier to write about those teen years if I wrote under my married name. Then, one day after the wedding, I got an invitation to join Facebook and I was all, “What’s this? This looks fun!” Two months later and people I shared crayons with in pre-school were friending me and all possibilities of me using my own actual real-life experiences in my stories were out the window. Sigh. Stupid Facebook. So now I must write Landry’s experiences as her own. That’s not to say my own memories don’t infiltrate and inspire certain plotlines though. My mom saw a lot of things I had been through in a new character in the series.

I may not use my actual experiences word for word, but I channel those feelings into the books. Writing about the teen years means going back and sharing the awkward and insecure feelings I had like wondering why someone who was supposed to be my friend was saying passive aggressive things to me—the whole, “Just kidding!” statement made after a mean spirited comment was thrown my way. Or how I felt while modeling and then feeling expectations to always look a certain way. And, of course, all the boy drama. Nothing like hearing rumors about another girl going after the guy you’re with, right? There’s a part in the first book in the series, True Colors, where Landry has been left out by her two best friends. Landry has to get up and walk across the room and ask another group of girls if she can join them. I remember an editor told me, “My heart was in my throat as I wondered, would these new girls accept her? Would they let her sit with them?” As this woman told me how she felt emotionally connected with Landry, it hit me—that moment I had written about was based on my own feelings. I had done that incredibly long walk back in middle school to another table to see if someone would let me in their group after my own had stopped talking to me for a day (who knows why, but at the time it seemed catastrophic). That awkward, uncomfortable memory that I wasn’t even sure I should write about had brought up something in this woman who was reading it for the first time. It was then that I realized that Landry’s (and my) vulnerabilities were the only way to bring truth and honesty to the story.

However, I never could have written this story back then because you need time to process all of those things and realize why they happened and what you can learn from them. While writing the story, it hit me that Landry’s parents could share with her what they had gone through themselves when dealing with self-doubt and insecurity when Landry talks about her fear of failure. As a teen, I never really picked up on what my own parents went through even though I witnessed my mom have “frenemy” moments of her own. It began to hit me how all these things never really stop, they just change a little as you get older. Recently, I’ve had friends share emails that hurt them from other adults and honestly, they could have been written by 14 year old mean girls. I realize now how important it is to learn how to handle these things early on and to know you’re not alone in having to go through these situations. I wrote the books I wished I could have had at that age to let me know I wasn’t alone in what I was feeling and going through and I hope now it helps someone else.

Krysten is an Amazon international bestselling author and book addict who has never met a bookstore she didn’t like. She’s worked as a journalist and writes middle grade, YA, humor essays, and adult fiction. She is originally from Michigan and has lived in Portugal, South Dakota, and currently resides in Southern Ohio where you can find her reading and writing when she’s not catching up on her favorite shows. She received her master’s degree from the University of Michigan-Flint.

5 thoughts on “Writing the teen years: From frenemies to crushes to self-esteem”