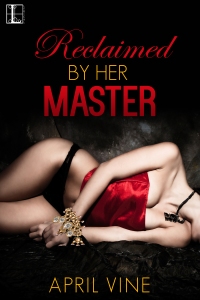 1) Where did your love of books/storytelling/reading/writing/etc. come from?
From my parents. They read voraciously and I grew up in a house with tons of books and encyclopedias which became an innate part of the furniture everywhere I looked.

2) When did you first realize you wanted to be a writer?
I think I always wanted to write, maybe from the time I started reading on my own. But it was only when I secretly picked up one of my Mom’s Barbara Cartland books in my teens that I took an interest in romance and actually wanted to write it too. Suffice to say I’ve come a long way from Dame Cartland’s style of romance.

Fun and a little goofy

4) Where is one place you want to visit that you haven’t been before?
Space – that would be awesome.

Reclaimed By Her Master

He’ll catch her in the act—and never let her go.

No one breaches the defenses of billionaire Dom Stephen Black—until Aria Swift does just that, stealing a priceless painting from his collection—along with his heart. But two can play that game, and soon a treasured necklace that belonged to Aria’s late mother ends up in Stephen’s skilled, waiting hands—along with a dare to retrieve it…

Eight years later, Aria is ready to put closure on her infamous past by meeting Stephen’s challenge. And suddenly, she’s caught in his trap…

There’s only one way to master a woman like Aria—and only one place to do it. Stephen’s luxuriously decadent Gold Room is where he’ll mete out her punishment, stroke by excruciatingly ecstatic stroke. Where Aria will submit to his every desire—and find in his touch, in his control, a frenzied yearning, and the ultimate pleasure of surrender…